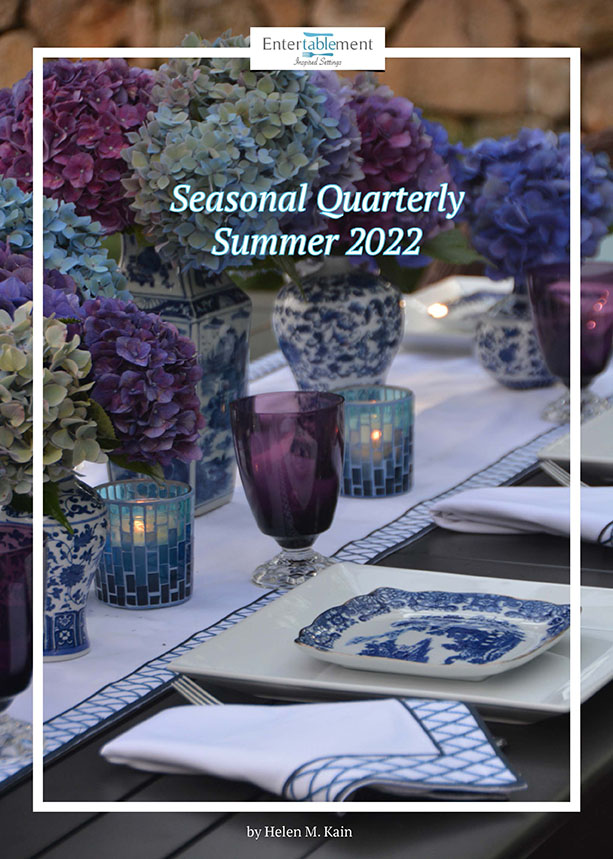 Finally, it’s summer! The peonies have burst into bloom, and long walks by the seaside have begun.

In this Summer 2022 issue of Entertablement’s Seasonal Quarterly, we have planted a garden with vintage Seed Packet Cookies in flowerpots filled with Salted Caramel Chocolate Mousse. The Garden Blooms on tables featuring seasonal flowers and lots of pretty tableware. And we showcase the best of summer’s bounty with delicious recipes.

Felines have an important place at the table in this issue with our Cat’s Pajamas Tea by the pool; Colourful Cats and glamorous Big Cats have tables all their own.

We also take an armchair trip to The Royal Pavilion in Brighton to visit the Prince Regent’s spectacular and exotic summer home, which has been variously described as silly, charming, witty, light-hearted, extravagant, gloriously eccentric, decadent, childish, painfully vulgar, socially irresponsible and finally, a piece of outrageous folly and a stylistic phantasmagoria. Whatever adjective you might land on, it’s doubtless an astonishing flight of the romantic fancy.

Simply click this link and an online “flipbook” version will appear at no cost. 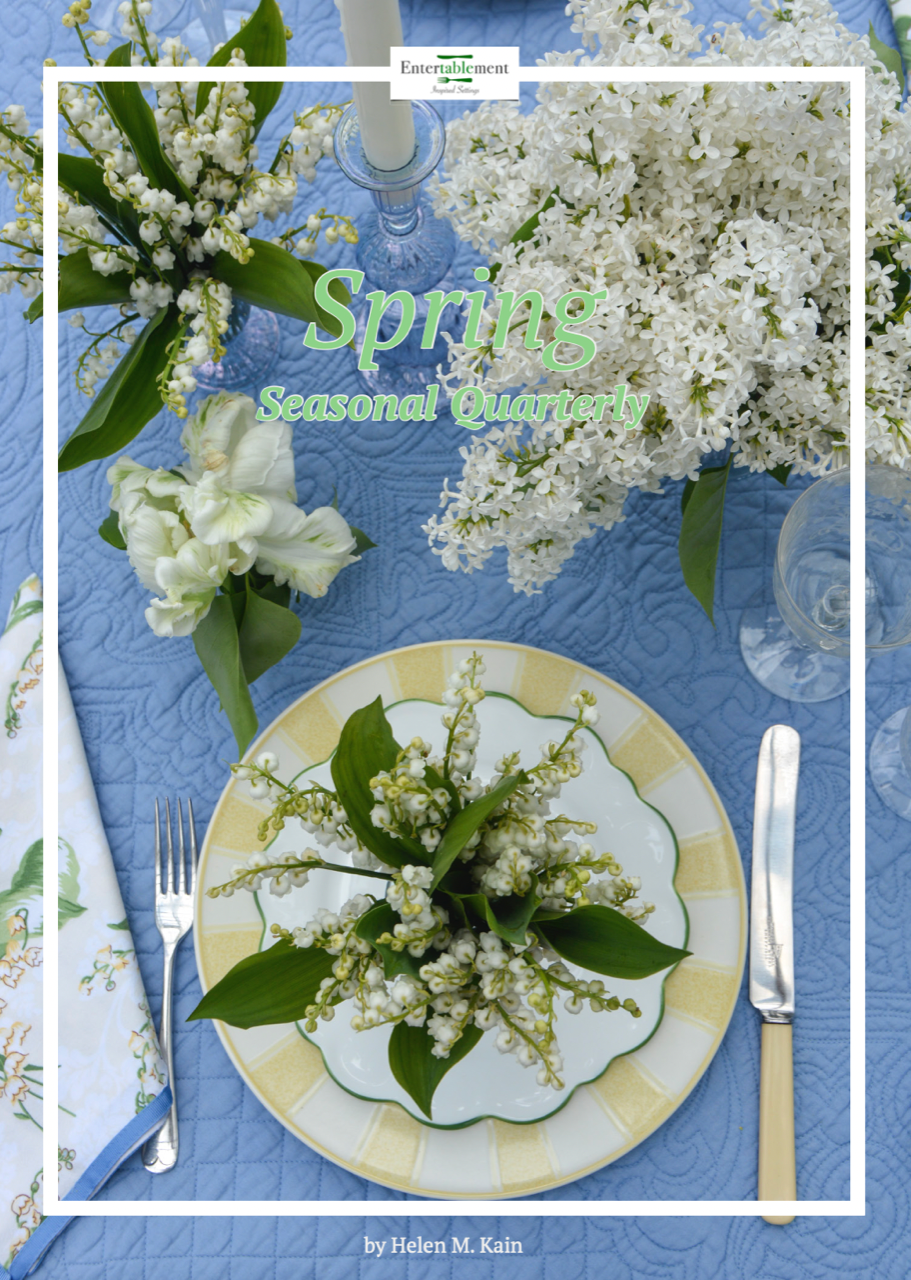 In this, the third issue of our Seasonal Quarterly, we celebrate Spring and are Eager for Easter. So we feature a savoury breakfast with Hot Cross Buns as a counterfoil to all that chocolate!

Spring has Sprung, and we have tables galore, all decked out in the flowers of the season, from daffodils and tulips to lilies of the valley. The menus feature tasty main-course soups, salads and light fare, perfect for al fresco dining. Strawberries and rhubarb take a bow as we take tea on the porch and dessert in the garden.

Please join in the fun as we explore the origins of May Day and celebrate with luscious cakes in the form of May Day baskets.

We enjoy a trip to Basildon Park in Berkshire, whose sojourn as a grand country house is an incredible story of survival against all odds in the 20th century.

Available for sale on Kindle (click below) or you can simply click this link and an online “flipbook” version will appear at no cost. 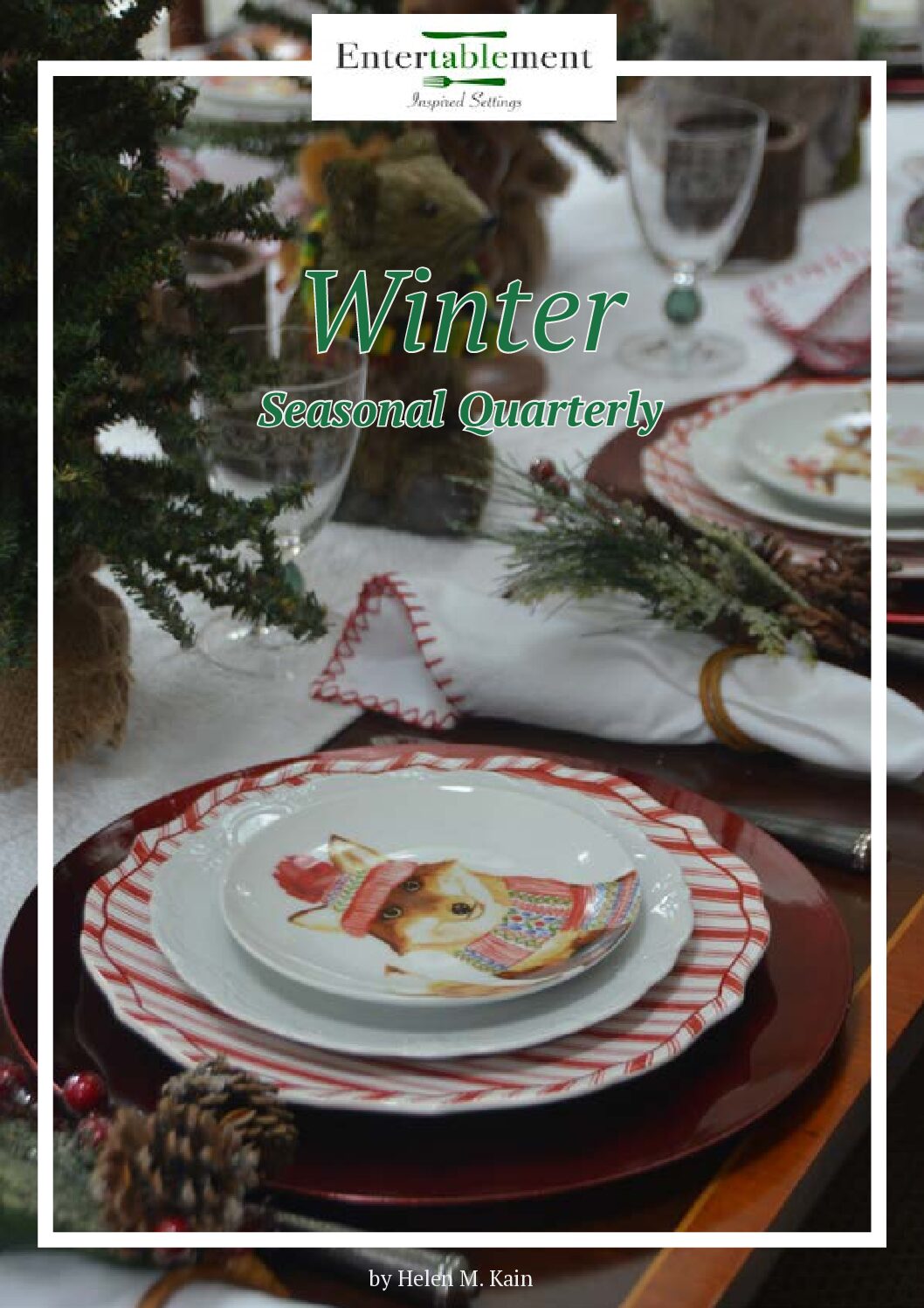 This is the second issue of our Seasonal Quarterly, and it features inspiring winter and Christmas tablescapes and some very tasty seasonal recipes. We also visit Kedleston Hall, the country home of the Curzon family since 1150, as it’s all dressed up for Christmas. Join us in exploring this stunning 18th-century mansion with neoclassic interiors by Robert Adam.

The recipes take us from breakfast through evening entertaining. Our Plan to be Impromptu chapter makes suggestions for your pantry, fridge and freezer to take you through the holiday season prepared for any occasion. Flexibility is key!The colorful, tasty and simple Roasted Vegetable and Proscuitto Tart has become a family favourite, and don’t miss the Spiced Rosemary Old-Fashioned—it’ll be your adult beverage of choice this season. Decadent Desserts include an elegant Pear Tart with Salted Caramel and a Champ de Noel, aka Christmas Stump, an upright version of the classic Christmas log.

Our table décor ranges from fun to formal (and some that are both fun and formal). You will find some traditional holiday colors and themes as well as some different colorways that really work throughout winter, including holidays.

From our house to yours, we are wishing you all the joy of the holiday season.

Available exclusively on Kindle. (If you would like to see this on other ebook publishing applications, drop us a line with your suggestions.) 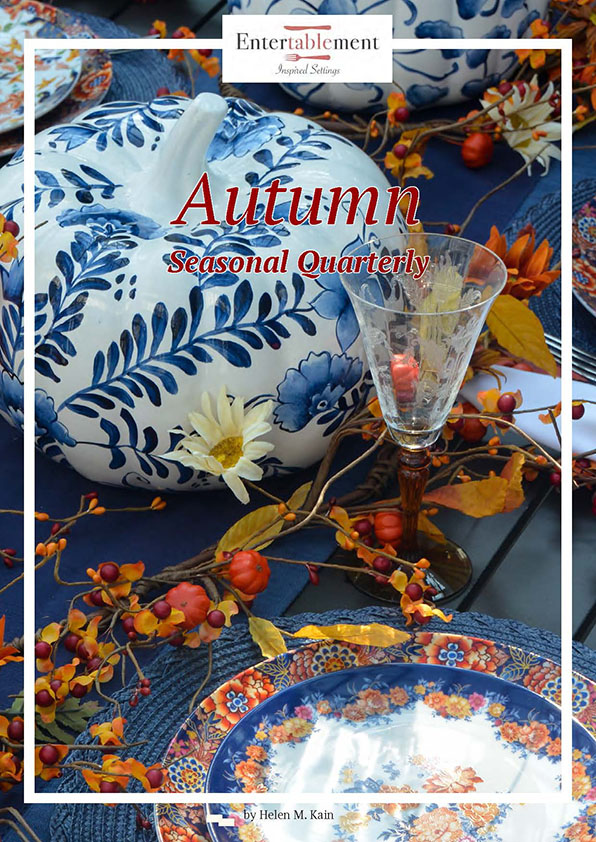 In our inaugural 100+ page issue of Entertablement’s Seasonal Quarterly, we feature fall tablescapes to inspire you, from quick and easy to layered and lush. In addition, history buffs will enjoy exploring the evolving role of game bird dishes in preparing and presenting rich fillings enrobed in crisp pastry.

We take a trip into Cambridgeshire to visit the Wimpole Estate, whose long list of owners included Elsie Bambridge, daughter of Rudyard Kipling, author of The Jungle Book and The Just So Stories. As you might expect of a literary family, the library is simply stunning.

I hope you’ll also enjoy the recipes, which cover breakfast to desserts—a Peach Cake and a Chocolate Stout Cake with Caramel Meringue, included. I was inspired to see how much I could do with a chunk of a leftover leg of lamb and a Savoy cabbage (A Sweet Lamb Pie, a pot of Scotch Broth and a bunch of Cabbage Rolls). A pan of Jalapeno Cornbread made its way into Tea Sandwiches and topped a Butternut Squash lasagne (no pasta required).

Whatever your favourite season, please join me in celebrating the arrival of autumn this year.

Available exclusively on Kindle. (If you would like to see this on other ebook publishing applications, drop us a line with your suggestions.) 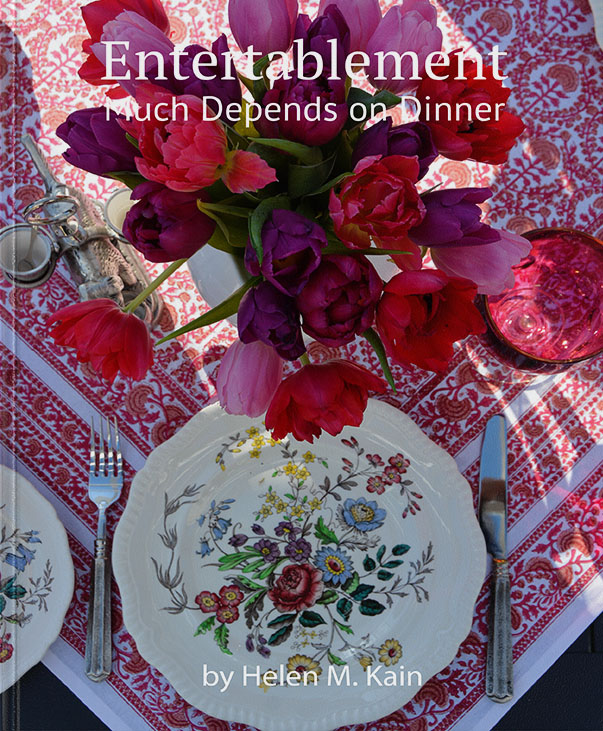 Take a Look Inside!

Much Depends on Dinner

History buffs. aspiring and experienced cooks and those with a fondness for gorgeous table settings will all delight in Helen Kain’s latest book Entertablement – Much Depends on Dinner.  The stars of this book are the ‘Domestic Divas’ whose recipes, homemaking tips, dining décor (and decorum) made their enduring mark on each era, right up to the present day.

Filled with humorous quotes, personal insights and tantalizing recipes that encapsulate different eras and styles of cooking and hosting, the book offers dramatically different perspectives on the planning, values, and artistry that go into a memorable home dining experience. It is vivid in its portrayal of the care invested in an exceptional dinner and shares countless insider tips for the most effective use of the cook’s energy and resources.

Observing the anxiety that often accompanies the preparation of dinner in modern times Entertablement—Much Depends on Dinner chronicles the history of cooking over the last few centuries and the integral domestic factors involved in preparing the evening meal. The book showcases masterpieces of food and domestic environments in beautiful photographs, with intriguing and dramatic biographical passages on some of the most iconic figures of cooking.

In addition to the historical aspect, Helen offers up her approachable interpretation of how recipes and table settings from past eras might look if modified for today’s world.

Era #1—Class Distinction
The industrial revolution created a middle class, eager to enjoy creature comforts previously accessible only to the very wealthy. The transition from agrarian to urban life was fraught with complex social strictures and a dearth of practical advice, described in this chapter through vivid illustration. Eliza Smith wrote the first cookery book published in America—an accessible companion for women carrying out household tasks. We also meet Hannah Glasse, a woman who rejected the complexity and expense of French cuisine and embraced delicious but simpler dishes.

Era #2—The Highest Highs & Lowest Lows
The burgeoning social mobility in the 19th is seen through the story of Isabella Beeton, whose iconic Book of Household Management lent further female credibility to cookbooks, and paralleled the movements for women’s suffrage and social freedoms of the era, This chapter includes an overview of the ‘Dollar Princesses’, young socialite women from North America who sought to marry into titled families in Europe.

Era #3—Mid-Century Modern
How capitalism came to define American women in the 20th century and their food-buying habits feature in this chapter. Brand names became ubiquitous, even fictionalised cooks such as Betty Crocker. Julia Child worked to make fine cooking accessible in this era, contrasted with simultaneous efforts to simplify cooking and reduce its stress through commercial products. The ritual of Afternoon Tea outside the home became increasingly popular.

Era #4—The Development of the Dinner Party
The mid-to-late 20th century saw the emergence of yuppies—baby boomers seeking to have it all. This self-sufficiency ideal was reflected in the rising popularity of Nigella Lawson, who promoted cooking in more simple terms, likening it to strengthening oneself and a means of survival. A more ad hoc style emerged with mixing and matching tableware and a focus on the end result rather than adhering to conventions. 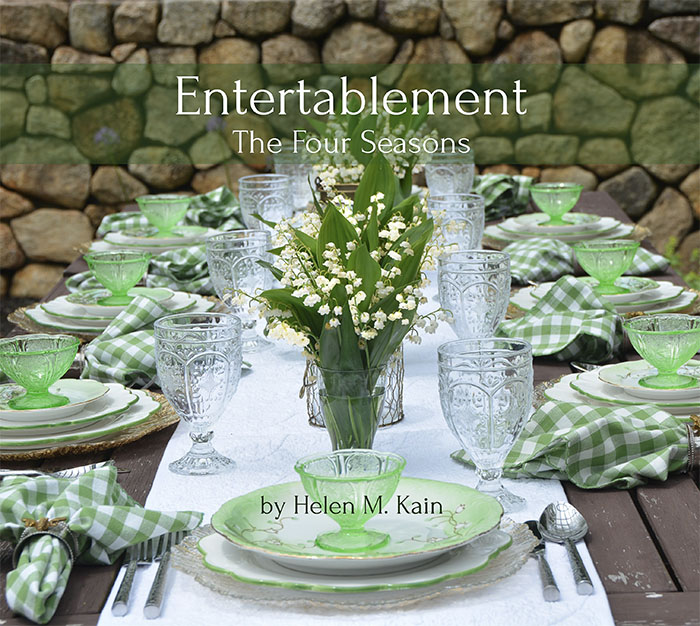 Take a Look Inside!

From Helen Kain, author of the popular Entertablement.com blog featuring table settings, food, celebrations, and travel, comes this elegant book filled with previously unpublished table finery and delectable cuisine. The book thoughtfully begins with the basics such as white tableware, neutral runners, white napkins, and clear glassware and builds from there, adding layers and colour to suit the occasion, and to delight family and guests of all ages. Helen writes, “I strive to make guests feel welcome, let family know they’re both important and cared for, and build memories, especially for the youngest generation of five granddaughters.” Narrated with just the right balance of wit and wisdom, flowers and found items often take centre stage, transforming the basics into something unique and extraordinary.

The recipes are thoroughly explained, beautifully prepared and served up with style equal to the lovely tablescapes.

Filled with inspiration, from simple to sumptuous, the stunning photography and beautiful, timeless settings in Entertablement—The Four Seasons, will make this collectable book a favourite for generations to come.

Helen Kain is a tableware enthusiast whose collection spans modern and vintage pieces to antique, Gilded Age porcelain and Venetian glass. She creates stunning yet approachable settings for everyday celebrations.

A self-taught photographer, she started the Entertablement blog in 2012 to share her creative outlet of tableware, baking, and home cooking.

In her professional life, Helen spent 30 years as an Investment Counsellor and Portfolio Manager before retiring for the first time in 2011. She is the co-founder of Authentic Impact, a leadership development and executive coaching firm based in Nebraska and Ontario, Canada.

Helen and her husband, Glenn, split their time between their homes in Canada and Cape Cod, Massachusetts, which they share with multiple golden retrievers, cats and an outspoken teddy bear, Teddy. 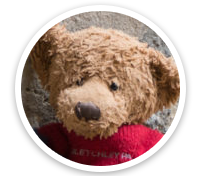 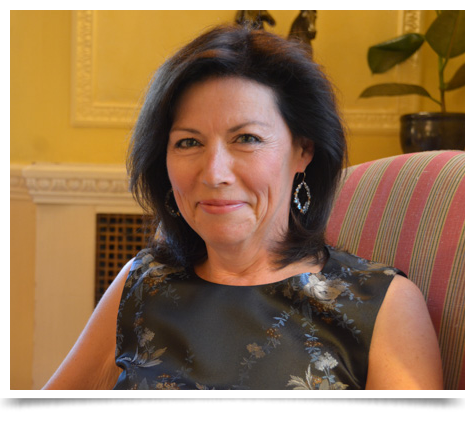